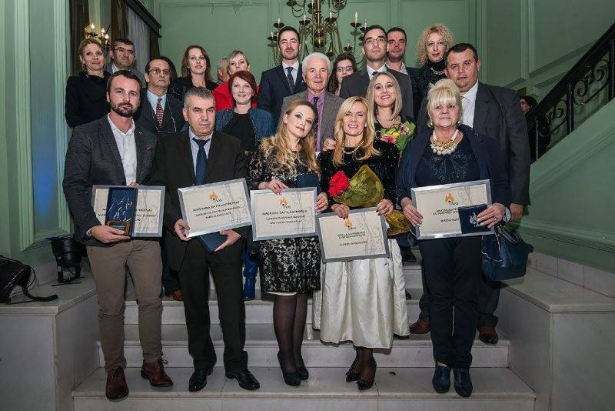 Sixth call for ISKRA awards was lunched on September 16, 2014 and on the closing date (October 17th) it received applications for 14 individuals, 6 companies, 5 NGOs 1 diaspora associations and 1 media. As in 2013, selection committee decided to grant 9 awards.

Award ceremony was organized on November 28, 2014 at Royal Theatre “Zetski dom” in Cetinje and it received significant attention of media, with 33 media announcements in total (including web, radio, tv and printed media).

The ceremony has been opened by Mr. Andre Lys, Head of Operations at the EU Delegation to Montenegro and Mrs. Anica Boljevic, executive director of fAKT.

The award for contribution to the local community has been given to Adriatic Marinas – Porto Montenegro, which donated over 2M EUR in socially responsible purposes, since its establishment, and supported various local activities in 2013.

The award for Diaspora contribution has been given to web magazine ” Gusinje-Plav” from New York, which raised almost 1M USD for charity since 2002.

Lifetime Achievement Award has been given posthumously to Mr. Vaso Cukovic, a Montenegrin from Denver (US), whose greatest legacy was hospital in Risan (Kotor, Boka Bay) and who gave to charity a large portion of his assets.

Mrs. Olivera Vukadinovic, journalist of the National TV, received award for media contribution and dedicated involvement in connecting Montenegrin immigrants and the state.

Association of Parents received award for citizen contribution to the common good and for a humanitarian action “Let us share, because together we can do more”, while a special award for humanity and solidarity was given to Mrs. Bisera Mustafic, who initiated and organized numerous actions for support to those in need.

Damir Kalac, journalist of news portal “Vijesti” won the award for civic activism, primarily due to involvement in environmental protection activities and initiative for arranging “Cemovsko polje” (a suburb area of Podgorica).

Mr Radomir Cakan Novakovic received award for support to the community, due to his relationship with his employees, support to development of sports and providing assistance to most vulnerable groups in the community.

Last year Philanthropy Excellence Award had been organized, as usual, in partnership with the Chamber of Commerce, Directorate for Diaspora and the Ministry of Sustainable Development and Tourism, with the support of the European Commission, the Foundation “Cano Koprivica”, the Rockefeller Brothers Fund and the Charles Stewart Mott Foundation.

You can find photo gallery on our FB page.