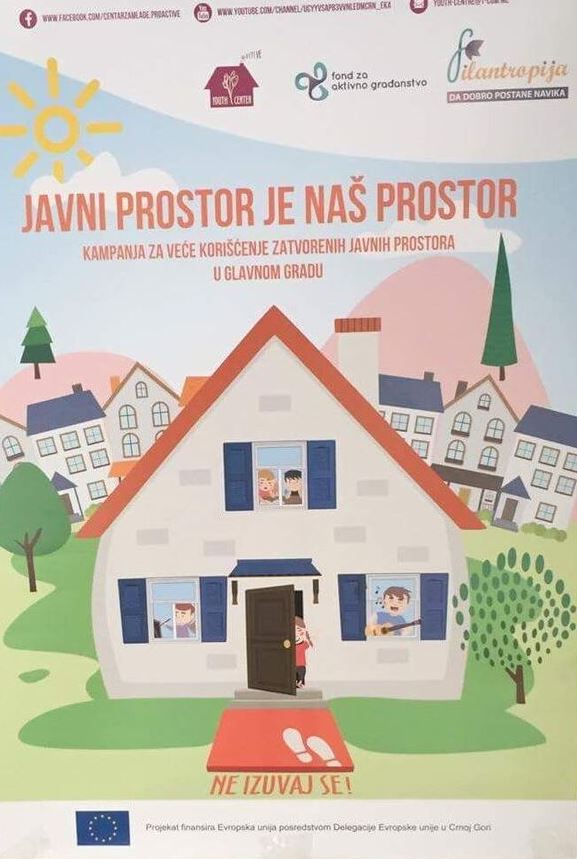 Center for Youth – “Proactive” was founded on September 27, 2005 and is active in creating social, cultural and other conditions for youth and their active and full participation. Practive contributes to the creation and development of a framework for active participation of youth in the society and decision-making processes at the local and national levels.

The project aim is advocating the use and managing of abandoned indoor public places in the capital of Podgorica, where young people and community members would have full freedom of gathering with the aim of conducting group activities, social and cultural services.

Proactive made a lot of efforts to inform citizens about the initiative. In the Capital, over 600 brochures were distributed and over 70 posters were posted. Volunteers and partners on the project had five TV appearances. Thanks to the engagement in the project, NGO Proactive have been proposed to test the model of using one public space by youth in the premises of ​​the Youth Center  in “Blok 5” (so-called part of the City) through the project “Testing the model of work of the Youth Center”. The project included the development of procedures and framework rules for the use of a public space, the establishment of the site of the Youth Center and a large number of young people used the Center’s premises during the testing period.

A series of events for representatives of companies, individuals and local governments, on the basis of examples, help them understand the idea and how they can take part and help the community and reflects best promotion of the project and participation of individuals and companies. Over 100 companies and more than 50 individuals have been contacted.

During the renovation of the premises in local community “19. decembar “, the individuals contributed significantly  to volunteering in removal of old furniture, removing and installing new electric sockets, cleaning space, etc. On promoting revitalization of abandoned public spaces youth in particular are included actively in the planning process through direct involvement and consultation. Some institutions recognized the importance of involving youth and will include such positive initiatives into municipal/city plans.

Proactive continued to be engaged in recognizing closed public spaces in the Capital, with the aim of increasing their use by the community. In accordance with previous experiences on the use of closed public spaces, and in agreement with the representatives of the Secretariat for Local Government, it is planned to propose a model for the use of the local communities space/premises.