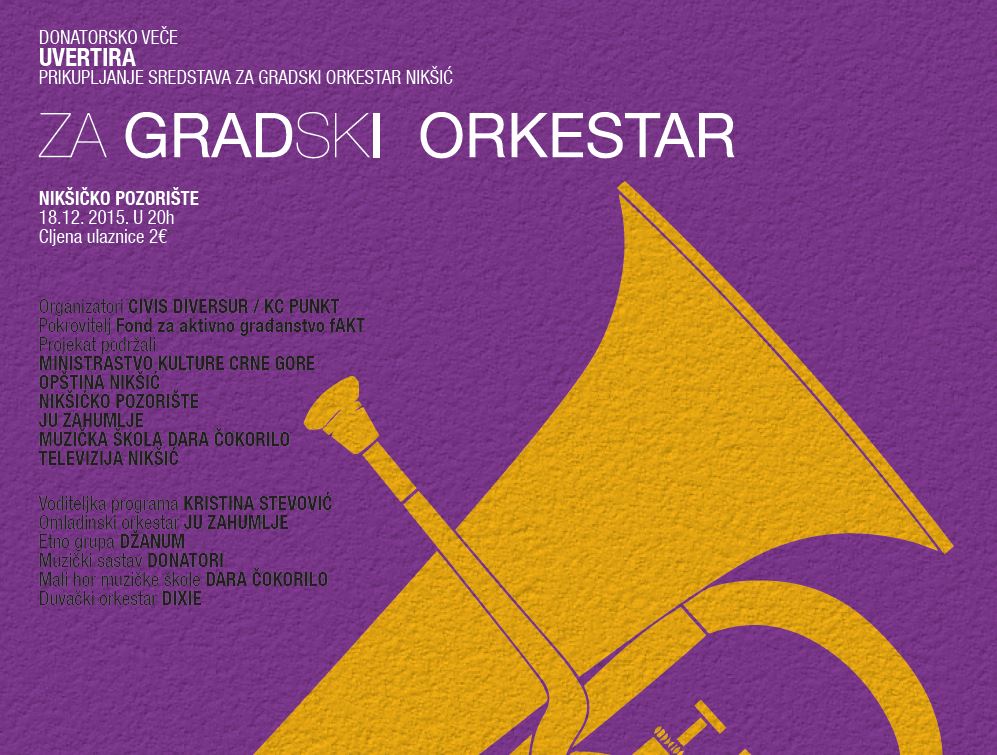 The project was supported within the Sustainability Academy of the SIGN for Sustainability program, which implied that the organization had advanced training on fundraising from local resources, and with the support of 1,000 € (technical grant) they have started to raise funds from the local community.

NGO Civis Diversus has initiated the action of reviving the City’s Orchestra in order to enhance the cultural and public life of the city of Niksic through the enrichment of cultural content and city offers that will be available to all citizens. Also, the goal of the project was to promote Niksic as a city of culture and cultural manifestations, a city with a developed spirit of volunteerism, as well as a youth city.

The Sustainability Academy program implied that fAKT will donate 1 € for each collected euro from local sources, up to a maximum of 4,000 € per a grant. Civis Diversus has not only reached the upper limit of the support but has significantly exceeded its target with close to 7,000 € of funds raised from local sources, so that with additional 4,000 € of fAKT support, the total value of the project reached 11,000 €. Also, around 2,100 hours of volunteer work, of members and volunteers of the organization, were invested in the realization of the project.

With the support of local partners, the organization has managed to revive the City Orchestra after nearly two decades of inactivity, to collect funds to purchase the necessary equipment and to gather old and new members of the Orchestra, whose number during the project implementation period increased from 12 to 23.

Also, 5 performances of the City Orchestra have been publicly organized, with audiences from 200 to more than 1,000 citizens per a performance; they succeeded to provide a space for the Orchestra work in cooperation with Niksic Theater and they made agreement with local institutions on long-term support to the City Orchestra.