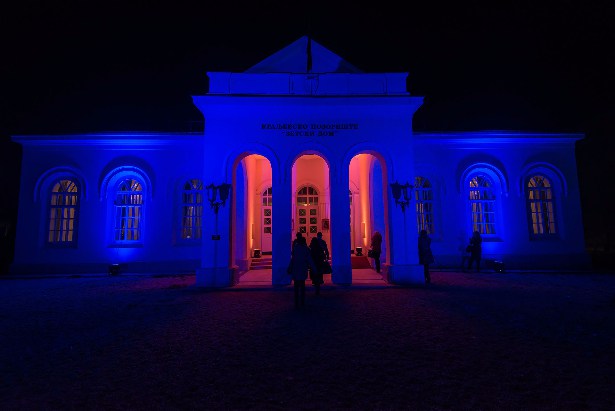 Held on December 9th, at the Royal Theater “Zetski Dom” in Cetinje, the 8th annual ceremony honored outstanding philanthropic achievements, recognizing and paying tribute to the individuals, businesses, institutions, diaspora and non-profit organizations whose contributions improve the quality of our lives, our communities, and our country.

All 150 seats at the ”Zetski Dom“ were taken and the ceremony was again the most emotional and fulfilling event that the Fund for Active Citizenship hosts each year. 150 guests, coming from all walks of life: from small CSOs and community leaders, to media, businesses, corporations, ministries and diplomatic missions – all celebrating commitment to the common good, honoring those who make a difference.

Award for Individual Contribution went to Mr. Daniel Vincek, economist by education but nature lover, botanist, ecologist, educator and philanthropist who developed Botanical Garden in Kolasin, which has grown into a kind of natural and cultural institution of Montenegro for thirty years of its existence and managed to gain the status of a protected natural resource.

The award for Diaspora Contribution went to the Association “BIHOR” from Luxembourg, which is well known to people of Bijelo Polje and Petnjica. This organization provides continuous financial and material support to organizations and individuals in the field of culture, health care and education, as well as preservation of tradition and cultural heritage in Bihor region.

Special Award for Lifetime Achievement was granted posthumously to Milivoj-Milo and Ana Zloković, whose life and work in the noblest way show the spirit of the endowments and the fact that giving to the community is a part of our cultural heritage and identity. Following desire of her husband, Mrs. Zlokovic bequeathed their property in Boka Bay for humanitarian needs and nowadays several school buildings are located on their land.

Special Recognition for Corporate Philanthropy was granted to two banks: Erste and Hipotekarna, due to willingness to recognize and support the common good in different spheres of social life (more than 100,000 EUR contribution to public good in 2016, each).

Erste bank provides multi-year support to development of culture, art, education and sport, through long-term support to the Music Center of Montenegro and the Montenegrin Symphony Orchestra, the Organization of Technology Students (EBEC BEST), Podgorica Marathon and the first basketball league for men. In 2016. Erste Bank started providing support to the Award for Social Entrepreneurship (Social Impact Award), while their employees as voluntary engaged in many social spheres.

Hipotekarna bank has a clear strategy of corporate social responsibility which is focused towards several directions: investment in culture, care of the elderly, health care improvement, investment in youth and overall contribution to the community. In 2016. Hipotekarna bank has supported a considerable number of projects for the public good, such as purchase of an ambulance vehicle for the Clinical Center of Montenegro, support to the Institute of Physics, Astrophysics and Cosmology, scholarships for two students of economy in Milano, etc.

Special Recognition for Media Contribution was granted to two media teams: Agency “Factory of ideas” for the TV broadcast “Per diem” and RTCG – National Radio and TV Broadcaster for campaign “You are beautiful – my hair, your strength”.

TV broadcast “Per diem” is a good example of placing media in the service of philanthropy and common good. This show which is broadcasted on TV Vijesti, for a year, collected over 35,000 euros for families in need, while the value of donated food and other donations is estimated at tens of thousands of euros.

Campaign “You are beautiful – my hair, your strength”, on the other hand, is initiated with the aim to empower women with cancer by helping them to regain a nice, natural look and to focus public attention not only to the problems facing people with cancer but on the importance of prevention of oncological diseases as well. Thanks to this campaign over 2,500 girls and women of all ages, including even men, donated their hair to made thirty natural hair wigs for women who are into cancer therapy.

Special Recognition for Contribution to the Common Good was granted to the Cultural-Information Center “Budo Tomovic” from Podgorica, which is, for half a century, an important player cultural scene of Podgorica and Montenegro. This institution for years provides organizational, logistical and media support to a number of projects and activities that are of interest to the citizens and the community.

Special Recognition for Civic Contribution to the Common Good went to Ljiljana Burzan – Nikolic and Davor Dragojevic, the founders of the International Festival of Puppetry, who provided free access to theater and art to more than 23,000 children in Montenegro, including those coming from vulnerable and disadvantaged groups and families.

ISKRA award ceremony is organized in partnership with the national Chamber of Commerce, the Ministry for Sustainable Development and the Directorate for Diaspora, and supported by a number of friends of ISKRA, as we call all those who believe in our mission and importance of philanthropy promotion and development. And they are many: from our strategic donors and supporters – the Charles Stewart Mott Foundation and the Rockefeller Brothers Fund, from the European Union as one of our major donors in the last two years, to those who lend a helping hand in organizing this great event: the City of Cetinje and its Mayor, whose opening speech has become a tradition; the Royal Theater “Zetski Dom”, whose staff spend hours and hours with us, volunteering their time with joy each year, to a number of media, which show increasing interest in being there with us, and in spreading the word about ISKRA. ISKRA – “sparkle”, that you can “get even from a stone”…